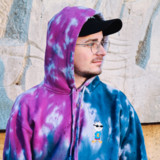 Being an uncharacteristic producer from Transylvania,

Ambiguu began his long term journey on the path of the electronic music industry starting august 2012. Slowly but surely he started building his career, joggling with all sorts of music genres, never surrendering himself even though he barely had any idea about the field he was wandering in. In what concerns his music taste, he is merely attracted to anything that is influencing or inspiring his sound, but he never backs down neither does he decline a challenge.