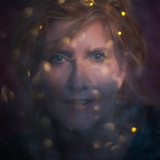 Eddi Reader grew up in Glasgow and Irvine, Scotland and it was in those towns that she learned  to use music as a vehicle for communicating with others through busking and performing at the local folk clubs. In the early 1980s, Eddi travelled around Europe with circus and performance artists before moving to London where she quickly became a sought after session vocalist. It was the short-lived but warmly remembered Fairground Attraction that really brought her into the limelight and to the attention of a much wider audience. The single ‘Perfect’ and parent album First of a Million Kisses both topped the British charts. Her subsequent solo albums signalled her increasing ability to assimilate different musical styles and make them all very much her own. Her unerring instinct for fine material, whether self penned, collaborative or a carefully chosen cover version resulted in Mirmama (1992), Eddi Reader (1994), Candyfloss &amp; Medicine (1996), Angels &amp; Electricity (1998), Simple Soul (2001) , Songs Of Robert Burns (2003) , Peacetime (2006), Love Is The Way (2009), Vagabond (2014). Cavalier ( Reveal Records 2018) is a new creative peak in an already prestigious career, just under an hour of new music, incorporating both contemporary and traditional songs. Eddi celebrates her 40th year as a live performer in 2018.<br>