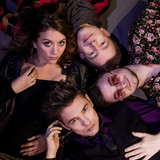 The Austrian melodic rock band Cornerstone has toured through the USA, had a number of appearances at UK and European festivals and are signed to ATOM Records (U.S.A.). In 2016 the band released their third studio-album "Reflections", which was produced in Canada in collaboration with Harry Hess (Billy Talent, Muse, Harem Scarem). In support of "Reflections", Cornerstone has toured through Europe three times, including a series of concerts with Gary Howard, singer of The Flying Pickets and the legendary Alan Parsons. They have also appeared on BBC Radio and were featured on the soundtrack of the film "Little Alien". Early in 2012, their song "Right or Wrong" was awarded "Ballad of the Year" by the British Rock Realms Magazine, followed in 2013 by the unexpected chart appearance of their cover of "Smalltown Boy", Cornerstone‘s take on the Bronski Beat 80's hit. All revenues from that single were donated to the "Room to Breathe" campaign, a charity benefiting Nottingham City Hospital.