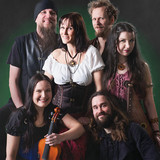 Greenrose Faire plays rousing Celtic folk rock with head-bobbing, toe-tapping rock feel. The Finnish sextet meshes mandolins and violin with rock drums and bass and symphonic synths, and spikes the rollicking attitude with the slightly ominous overtones of Finnish melancholy. During the winter of 2007-2008, the founding members Tomi Hyttinen and Niilo Sirola two recorded an album’s worth of demos at Niilo’s home studio. “Neither of us really had done much acoustic stuff before, so we had great fun trying out different things. ‘No electric guitars’ was the only rule,” recalls Tomi. They then set out to find the other members for the band, a group of local musicians who had always liked to play this kind of music but just had not realised it yet. Things clicked into place with finding of the vocalist Salla Rimmi, with her elegant phrasing and tone clear like a bell. “It has been amazing to notice the effect our music has on people. Our songs seem to have a special kind of magic,” Salla jests. “We even had to stop playing Raindrops at outdoor gigs because it often started to rain during the song.” The band’s debut album Neverending Journey was released in 2011, followed with