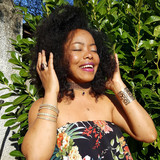 Noëlla Raoelison is a golden-voice artist from Madagascar. She works at the famous Mars studio in Antananarivo, which produces most of the island's artists, as a singer and chorister. She went on international tours, notably with the group Tsivery, the singer Koike and even Mikea (RFI 2008 award), before settling in France in 2006. After meeting Franck Tchalian, songwriter and producer, she works on different pop, jazz and different album projects, mixing song and world music (Baobab, Une île, Enfant). Currently, Noëlla feels a real need to assert her identity and to return to the sources. In her new Ep "Nostalgia", she offers us her own compositions, sung in her native language "sakalava". This "new world music" has its origins in traditional Malagasy melodies, but also in hip hop, electro or jazz. These songs, inspired by her experience and representative of a changing world, speak to us about uprooting, exile and the need to return to the sources. On stage, Noëlla is surprising, she has an exceptional voice, a scenic presence and an incomparable charm.