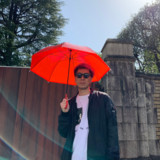 Keyboard player, singer-songwriter, arranger. Using Fender Rhodes Piano as the main instrument, Ino is known for his unique world of music, incorporating various elements from sounds of the 60s-70s, Avant-pop, Alternative Soul, Electronic Funk, Soundtracks of old films, and Experimental Music. Ino started learning piano at the age of 5 and later received classical music education. In 2002, in order to realize perfect quality control, Ino launched “Innocent Records” in Ebisu, Tokyo with “One Label, One Artist” as the concept. After that, he has been creating and performing fully independently without belonging to a record company nor production.

Ino published many works from his own label, including the 11 works of “7-inch series”, a series in which works were made with his particular passion in 7-inch records.