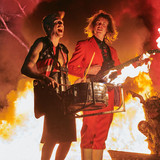 Deltaphonic’s upcoming double EP, Angels, perfectly captures the lawless international lifestyle and obsessive dedication to songwriting, innovation, and prodigious musicality that distinguish the group as 21st century purveyors of an uncharted variety of southern rock. Disenchanted in the wake of the pandemic and their last acclaimed release, The Funk, the Soul & the Holy Groove, Deltaphonic left the U.S. to throw a music festival in Ecuador. A brief visit turned into a six month sojourn and the resulting experience reinvigorated their lives and their dark humor infused dueling guitars meets hill country blues meets New Orleans funk influenced sound with Latin rhythms and a unified energy.   Recorded between New Orleans and their new second home base on the coast of Ecuador, Angels, is a simmering rock n’ roll reflection on the existential dilemmas artists face as they confront the sometimes difficult personal and universal truths that are unavoidable in the quest to create undeniable work.   In the process of making Angels, band members Andrew T. Weekes, Paul Provosty, Trenton O’ Neal, Elmo Price, and Logan Sellers solidified the rare kind of lifelong bonds essential for a rewarding career on the road and in the studio dedicated to making listeners feel their music like no other.   The title single, Angels, is set for release December 3rd 2021 with the rest of the double EP due out in 2022.