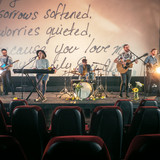 Featuring I, the Mountain

I, the Mountain is a five piece pop-folk band based in Kitchener, ON. Known for their joyous harmonies, high energy performances, and infectious song writing, the band has built a passionate fanbase of “Mountaineers” from their hard work, never-quit attitude, and genuine love for music and community. Fresh off their recent studio collaborations with Canadian music icons Simon Ward (The Strumbellas), Jonas Bonnetta (Evening Hymns), and Dan Ledwell, I, the Mountain is ready to bring their indie-folk sound to main stages across Canada. Their debut album, Little Wild, released at the start of the COVID-19 pandemic, explores themes of togetherness, loss, and the need for escape. Little Wild and its singles “The Boat” and “Winter Blues” earned the band national airtime on CBC Radio and solidified their status as true up-and-comers within the Canadian music scene. Keep an eye out for new singles set to drop summer 2021. “They are all natural vocalists who love to harmonize – a strength they use to their advantage during live shows, initiating sing-alongs and stealing the hearts of audiences who can’t resist joining in.” - Good Company Productions "There’s nothing better than a small band making big moves, and that’s exactly how I, the Mountain is conquering in the Canadian music scene" - RedPine Music