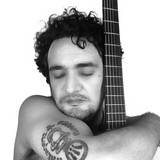 Original singer songwriter, multi-instrumentalist, composer, producer, film-maker and social activist – Tim Arnold is a maverick artist whose work stretches the boundaries of the imagination and defies genre and category. In recognition of Tim’s constant change of musical direction, Iggy Pop noted in an interview with NME how Tim’s music reminded him of David Bowie. Tim scored the soundtrack for Iggy’s latest film, Blood Orange, which featured the theme song, “Money Kills Love.” The latest video single, ‘What Love Would Want’ was inspired by the United Nations ‘He For She’ campaign for gender equality – and has sparked a movement for social and human rights in Europe and North America. Tim has an uncanny and rare ability to turn the deepest mysteries into commercially accessible, radio friendly tunes. In the UK, Tim is widely recognized as the first artist to write and release a concept album about London’s famous Soho district, 2015’s The Soho Hobo. Together with Benedict Cumberbatch and Stephen Fry, Tim also leads the Save Soho movement – a lobbying group devoted to inclusivity, diversity and advancing the future of performing arts venues in London’s Soho. Tim is constantly in creative mode – writing, recording or releasing another album or project – each light years apart from its predecessor and without ever repeating himself. Inspiration hard-won through personal experience, and graced with an extraordinary gift of creative expression.