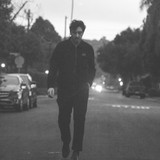 Adam Day, County Line Runner bottles time inside of each song and imparts a piece of himself on every composition. Debut songs “Hard to Find” and “Wide Eyes” quietly caught fire, with over two million combined Spotify streams and endorsements from BBC Music, The Times and more. Days first single 'Saw You in a Dream' was featured on Apple TV's hit show 'Ted Lasso'. Named after an American outlaw "The County Line Runner ", the moniker summarises his place at a handful of intersections—upbeat energy versus introverted vulnerability, folk sensibilities versus rock ambition, and nostalgia-for-days-gone-by versus hope-for-the-future.