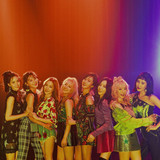 Girls’ Generation, achieved great success and popularity as soon as they made their debut with their single “Into The New World” in 2007. The group is consisted of 8 members, fluent in various languages including English, Chinese, Japanese, and versatile in various field such as singing, acting, MC, DJ, and modeling. Over a decade, Girls’ Generation has released a number of albums. Every time when their new song was released, they swept numerous world music charts straight away, such that they won No.1 on Billboard World Album Chart constantly for the last couple of years. Girls’ Generation’s Music Videos are also anticipated and take a huge attention across the world. In 2013, they even achieved ‘The Music Video of the Year’ at YouTube Music Awards with their 4th album , which also meant they were the only and the very first winner of the award as Asian singers. In accordance with their worldwide reputation as the best K-Pop girl group, they constantly build up incredible new records. The accumulated number of their album sales reached over 600 million, through over 150 concerts across the world they had recorded nearly 3 million audiences.