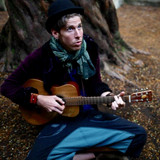 Caraluna is the bilingual (English/Spanish) indie/world/folk project of singer-songwriter-traveler Jesse Thom, whose first solo album, “Snowdragons,” was rated in the top ten albums of the year by Folk Radio UK. Inspired by old-world singers such as Jacques Brel and by minimalist composers like Yann Tiersen, Thom infuses simple, emotionally compelling melodies with poetic, life-affirming musings from his years of travel throughout Latin America, Western Canada, Spain and the UK.

The project also draws influence from the art of Sacred Clowning, in which Thom has trained under teacher/performer Didier Danthois of Tenerife, Spain, for the past several years. Based in the Gulf Islands of BC, Canada, Caraluna features Thom’s rich and relaxed voice accompanied by tiny guitar as the foundation of its sound.