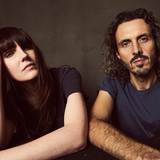 They met. They fell in love. They wrote songs. They fought. They made up. They broke up. They wrote songs. At a time when for most it would be the end of a relationship, for Australian duo Falls it was just the beginning. After having spent every Wednesday night for two years playing at a little hotel in Sydney called the Hollywood, the duo took a leap of faith and headed to the U.S. for the first time to play SXSW. Just a few months later, they moved to LA and spent the 12 months that followed traversing the length and breadth of the U.S, playing shows and writing the songs that would become their first full-length release. Recorded with producer Mike Mogis (Jenny Lewis, First Aid Kit, M.Ward), and largely shaped by their love of American folk-rock, Falls’ sprawling yet intimate debut album Omaha elegantly captures both the thrill and fallout of following through on a dream. Having toured with The Lumineers, Passenger and Of Monsters and Men, Falls are fast developing an impressive live resume which includes performances at Bonnaroo, Firefly, ACL, Bumbershoot, Loufest and AmericanaFest. The connection between the two musicians onstage is palpable. Their emotionally fueled live performances drawing rave reviews, with the Sydney Morning Herald noting "their voices sit next to each other like they've been pouring from the same pot of tea for years". “With its sweet harmonies and hooky choruses, the set is drawing airplay at adult alternative radio” - Gary Trust (Billboard)