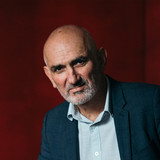 Singer/songwriter Paul Kelly captures Australia in his songs the way Bruce Springsteen or the Kinks' Ray Davies have encapsulated their home lands, and he does it with the musical energy and diversity of Elvis Costello. First making his name with the folk-oriented, semi-acoustic sound of 1985's Post, Kelly enjoyed a major breakthrough with 1987's Gossip, which was centered around his smart, full-bodied pop melodies and literate but unpretentious storytelling. 1994's Wanted Man found Kelly digging deeper into more personal themes as his music gained more bite while still remaining tuneful. Kelly's folk and country influences came to the fore on 1999's Smoke, but Professor Ratbaggy, released the same year, was a head-first dive into contemporary sounds, full of adventurous production and electronically manipulated sounds. From 2000 onward, Kelly's catalog was dominated by thematic efforts, including charting the rise and fall of a relationship (2012's Spring and Fall), writing music for funerals (2016's Death's Dateless Night), and adapting the works of noted authors to music (2013's Conversations with Ghosts and 2016's Seven Sonnets and a Song), all married to melodies that showed he had a firm command of both electric and acoustic arrangements.

The sixth of nine children, Kelly was born in Adelaide in 1955. After school he wandered around Australia for a few years, working odd jobs, writing poetry, and thinking about a career as a short-story writer. He was already in his late teens when he picked up a guitar. Kelly made his public debut singing the Australian folk song "Streets of Forbes" to a Hobart audience in 1974, and two years later, he moved to Melbourne to join R&B pub band the High Rise Bombers. With a large lineup and three songwriters, the band's splintering was inevitable and Kelly formed his own group, Paul Kelly & the Dots. Kelly immediately established himself as his peers' favorite songwriter. On nights off, Melbourne musicians went to see him. He also had a big fan at Mushroom Records. One of the company's PR people locked herself in a room, refusing to come out until Mushroom signed Paul Kelly & the Dots. The result was two roots rock albums, Talk and Manila, which Kelly himself was never completely happy with given his perfectionism. By late 1984, Kelly had broken up the Dots and moved to Sydney, where he recorded a defining solo album called Post. Without a record contract and no real idea about how the album was going to be released, Post was recorded over two weeks on a shoestring budget, delivering the essence of Paul Kelly in a loosely structured song cycle signposting Adelaide, Melbourne, and Sydney place names the way Springsteen speaks of New Jersey. On the strength of that album, Mushroom picked up Kelly's contract again, and the singer formed a new group, Paul Kelly & the Coloured Girls (a reference to Lou Reed's "Walk on the Wild Side"). In September 1986, Kelly's songwriting skills spilled over four sides of the 14-song double-album Gossip. Recorded in just a month, the classic Australian rock album attained gold sales and produced the hit singles "Darling It Hurts" and "Before Too Long." The album included three re-recorded songs from Post. Gossip was also the record that introduced Kelly to American audiences when it was released by A&M in July 1987, edited down to a 15-song single album. In the meantime, the group returned to the studio to record a collection of 14 new Kelly originals for its second Australian album, Under the Sun. To avoid misunderstandings, the group changed its name to Paul Kelly & the Messengers with the release of July 1989's So Much Water, So Close to Home. The new album was produced by Scott Litt of R.E.M. fame and its songs were colored by American influences and experiences. After one more album, Comedy, Kelly decided the group had gone as far as they could, and to avoid the risk of repeating themselves, he dissolved the Messengers with a farewell tour. For the next two years, Kelly recharged his batteries with a set of diverse activities, like performing in Australia and America, producing the groundbreaking Charcoal Lane album by aboriginal songwriter Archie Roach, collaborating on Yothu Yindi's "Treaty," writing songs for his acting role in the stage play Funerals and Circuses (about racial tensions in small-town Australia), and releasing his first book of poetry, Lyrics. His second studio solo album, 1994's Wanted Man, spread his musical influences as wide as his activities. His 1997 greatest-hits album Songs from the South sold double platinum (a second volume didn't appear until 2008). In 1999, he delivered two very different albums at the same time, a bluegrass album with Uncle Bill called Smoke and a technology-influenced album with a new group, Professor Ratbaggy. Kelly was prolific in the 21st century, releasing Nothing But a Dream in 2001, the double-disc Ways & Means in 2004, the bluegrass-inflected Foggy Highway in 2005, and an album with the surf-influenced band Stardust Five in 2006. Stolen Apples found him back in traditional form in 2007, and a live album from the Stolen Apples tour was released in 2008. In 2010, the Australian radio outlet Triple J paid homage to Kelly on the occasion of his 30th anniversary as a live performer with a special live concert featuring a variety of artists interpreting his songs. The show was broadcast and later released on the album Before Too Long: Triple J's Tribute to Paul Kelly. That same year, Kelly published a memoir, How to Make Gravy, and a documentary on his life and work, Paul Kelly: Stories of Me, was released. In 2012, Kelly released Spring and Fall, a concept album about the beginning and end of a romance. In early 2013, Kelly teamed up with another Antipodes pop icon, Neil Finn, for a major duo tour of Australia; the show spawned a live album, Goin' Your Way, that was recorded at the Sydney Opera House and released in November 2013. (The album received a belated American release in December 2015.) Late 2014 saw the release of The Merri Soul Sessions, a set of soul- and R&B-influenced tunes recorded live in the studio with guest vocalists Clairy Browne, Kira Puru, Linda Bull, Vika Bull, and Dan Sultan. In 2016, Kelly released an unusual project, Seven Sonnets and a Song, in which he set a handful of pieces by William Shakespeare to music. Arriving in 2017, Life Is Fine found Kelly adapting a poem by Langston Hughes into a song and creating a sequel to the Roy Orbison hit "Leah," along with a handful of new original songs. Kelly continued his experiments in adapting literature to music with 2018's Nature, which featured songs drawn from the writings of Dylan Thomas, Sylvia Plath, Walt Whitman, and Philip Larkin. 2020 brought two albums from Kelly -- Forty Days was a collection of rough-hewn home recordings Kelly made during the COVID-19 quarantine period, and Please Leave Your Light On featured new interpretations of songs from his repertoire performed with pianist Paul Grabowsky. ~ Ed Nimmervoll & Mark Deming, Rovi