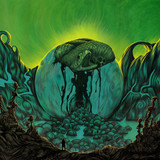 Yuri Gagarin is a heavy space rock band from Gothenburg, Sweden. The band was formed in the beginning of 2012 and started out as a trio, but turned into a five-piece after a couple of months. Their heavy psychedelic sound is built by powerful riffs, intense lead guitar, heavy drums, overdriven bass and oscillated synth noises. The band released their first album in 2013. The album was remixed and re-released in 2014 on both LP and CD. In 2015 they released both the Sea Of Dust EP and their second album, At The Center Of All Infinity. in January 2020, the band released their third full length album called The Outskirts Of Reality. The band has also done lots of gigs and played at festivals throughout Europe and Russia and are renowned for their great live performances.