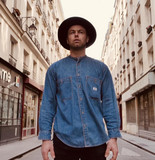 Harry Keyworth has a raw energy with a rhythm based percussive feel creating drumbeats with nothing beyond his guitar. His vocal style tends to be soft, often singing falsetto with a voice   Guided by early influences from his parents, Harry wouldn’t leave his dad’s guitar alone and from the age of 6 began learning the 12-bar blues and his first chords. Originally from West Wales, Harry eventually moved to London after his schooling and released his first EP, Flux (2013) which landed on BBC's record of the week and received extensive airplay including BBC 1 and 6 along with other UK national playlists and has received over a million streams. Harry’s second EP, Fine Line (2015) caught the attention of a wider international audience bringing him to Korea, And all around Europe. He’s half way through releasing his Above My Head EP mixed by Justin Stanley (Beck, Eric Clapton, Sheryl Crow, Mark Ronson, Prince, ) set for release in early 2021.   Above My Head harkens back to his first release and expands to his new sound slightly reminiscent of dynamics heard in Sampha, D'angelo or Bon Iver. The EP also features a guest vocalist for the first time, Holly Martin (Kobalt/Universal) on their collaboration 'Quiet Now’.