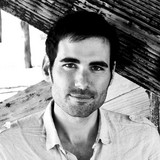 Garth Stevenson is a composer and double bassist. Raised in the mountains of Western Canada, nature became his primary inspiration and the common thread between his life and music. His three full-length solo albums, Alpine, Flying, and Voyage are informed by his experiences carrying his 150-year-old double bass to the woods, beach, desert and other remote locations including Antarctica and Tuva. On his expedition to Antarctica, he was joined by the legendary whale researcher, Roger Payne. One evening, Garth began imitating whale calls on his bass and within minutes a dozen Sei whales appeared and swam next to their icebreaker. His work as a film composer includes his collaborations with director John Curran on the biopic Chappaquiddick, starring Kate Mara and Jason Clarke, and

Tracks which featured Mia Wasikowska and Adam Driver. Other notable films include Them That Follow, (Olivia Coleman). 10,000 Saints (Ethan Hawke), Resilience, Tater Tot & Patton, Seed, Roadside Picnic, The Grizzlies, Red Knot, Young Lakota. Stevenson has performed all over the world as a solo artist and with bands. In 2009 he began offering music meditation hikes at Wanderlust where he leads intimate audiences on a hike then improvises music in nature. Garth attended Berklee College of Music on a full scholarship. He is the recipient of the International Society of Bassists composition competition, the Henry Mancini fellowship by ASCAP, and a four-time recipient of Canada Council grants.