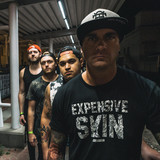 Featuring It Lies Within

A tech-heavy metalcore unit with a positive message and a flair for pairing punishing breakdowns with kinetic bursts of EDM, Flint, Michigan's It Lies Within were founded in 2008. Formed around the talents of longtime friends Zachary Scott (vocals), Matthew Groshart (guitar), Kyle Dameron (guitar), Erik McKay (bass/vocals), and Kamron Mead (drums), It Lies Within were looking to subvert some of the negative energy surrounding their troubled hometown into something a little more life-affirming. The group spent its formative years honing its sound regionally, and by 2011 It Lies Within were a full-time road operation looking to insert themselves onto the national stage. High-profile shows with bands like Chiodos, the Devil Wears Prada, All That Remains, and We Came as Romans helped to elevate their profile, as did the release of their 2012 Luxor Records-issued debut album, Chrysalis. The band's sophomore studio long-player, Paramount, followed in early 2016. ~ James Christopher Monger, Rovi