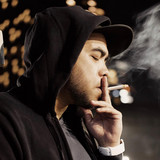 wassup peeps, my name is One3D and i’m an independent, self-produced rapper from Quezon City, Philippines. my sound can be described as a hybrid between modern trap and east coast hip-hop, with songs that aim to give a voice to unspoken thoughts that people are often too afraid to voice out.  i’m 1/4 of Audible Mcs (with Jon Protege, Liquid, and PJ) and handle every single aspect of my music: from writing, recording, producing, mixing, mastering, and even video production.