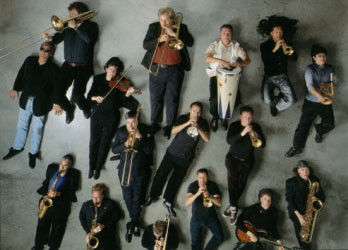 Led by John Korsrud, the Hard Rubber Orchestra features a flexible cast of 15 to 30 Vancouver (Canada) jazz musicians. Their blend of serious music and hot grooves makes them a powerhouse of intelligent entertainment, something Korsrud has put to good use through a number of multimedia special events, some particularly outrageous. The group (two-thirds brass, plus rhythm section and occasional strings) has collaborated with singers, DJs, dancers, and video artists. On record, the H.R.O. sticks to avant-funk compositions by its members and outside composers. Korsrud, himself a trumpeter, formed the Hard Rubber Orchestra in 1990, following his graduation from the University of British Columbia School of Music. A fresh cohort of jazz musicians was taking hold of the stages at the time. The NOW Orchestra had been founded a few years before; improvisers like cellist Peggy Lee, guitarist Ron Samworth, saxophonist François Houle, and drummer Dylan van der Schyff, who would all become leading exponents of the Vancouver modern jazz scene, were all making their professional debut. Korsrud's vision of an orchestra meshing up the serious and the vernacular, the conceptual and the entertaining, needed time to prove its worth. Furthermore, the size of the ensemble and soon the busy schedules of its members prevented regular public appearances, so from its inception to 1998, it remained confined to its home ground. Highlights included the events Elvis Cantata (1994) with singer Sook-Yin Lee and White Hot Core (1995), a collaboration with the dance troupe Kokoro Dance, plus regular apparitions at the Vancouver Jazz Festival. The director of the Festival International de Musique Actuelle de Victoriaville, Michel Levasseur, had already invited many Vancouver projects and gave the orchestra its first ticket to the East Coast in 1998 and signed it to his label Victo. The CD Cruel Yet Fair was released in April 1998 and the H.R.O. embarked on their first tour, making it as far as Amsterdam (Korsrud had studied with Louis Andriessen). The album was nominated for a Juno Award in 1998. In April 2000, the H.R.O. staged the multimedia performance The Ice Age, an extravaganza with 12 figure skaters, hockey players, curlers, and Zamboni choreography. At the same time, members of the group (including Korsrud) joined top Latin musicians from Vancouver to form the offshoot Orquesta Goma Dura. A second CD by the H.R.O., Rub Harder, came out on Victo in 2002. ~ François Couture, Rovi