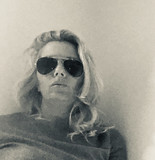 Who's Dj Crowft? French House producer , Barbara Crowft is originally from Lyon and lives on south of France. Label owner of the label TRANS'PACT production in 1991 , she manages various artists of the Trance scene of the time Under the name Thaïsha with Asia 2001

AKA Loren. X performed live all over Europe, including Berlin's Love Parade, Israel, USA and Canada. He played in New York's legendary clubs like the Limelight and Tunnel. Following the record crisis due to the development of digital media Trans'Pact Productions Closes its doors. Several years later Barbara Crowft decides to make a music following the announcement of a cancer and released her first EP on the label Trax Records Chicago . Her music oscillating between Electo-house and House . Always happy and groove ! She’s coming back this time to the front of the stage as DJ producer by imposing her house / tech-house style . Check out : barbara-crowft.com