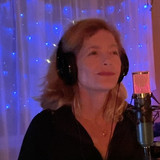 For over two and half decades, Kiki Ebsen has captivated audiences as a performer at home on any stage. She’s toured internationally as supporting vocalist and keyboard player for Grammy-winning, Platinum-selling musicians while building her own solo career as a singer-songwriter. Now with seven CDs of her favorite originals and cover songs, Kiki is currently completing an album of original songs this year, while waiting to resume performing in ensembles including Jazz, Symphony Pops, sets from the Great American Songbook tribute concerts to Joni Mitchell and Laura Nyro, and other settings, from festival to cabaret. In 2019, together with Steve Wallace (StKi Productions), Kiki produced her stage musical, “To Dad with Love: A Tribute to Buddy Ebsen,” at Theatre West, the longest continually operating theatre company in Los Angeles. As a lifelong equestrienne, Kiki also owns and operates a nonprofit, The Healing Equine Ranch. For more information, visit kikiebsen.com