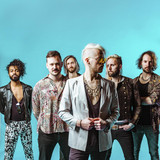 The band’s origins trace to their attendance at their school and playing together since their mid-teens. Throughout their musical career the band opened for several major acts and played most of the major festivals in Switzerland after releasing their debut album “Eyes Closed” in 2016 reaching number three in the swiss charts. Beside touring in their homeland, the Ukraine and some of Europe, the Band played shows in Singapore and the USA. After playing over 400 shows in the last decade the band took some time off the spotlight to write and record their next album “Queenie Pop” which is now available everywhere!