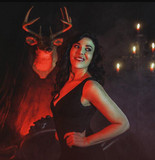 Singer-songwriter Tamara Maddalen graces the Canadian music scene with her beautifully crafted songs and clear, powerful vocals. Since 2017, she has been collaborating with producer/engineer Justin Koop (Walk Off The Earth, The Shyp, Tomi Swick, Newworldson) at Burlington’s B Town Sound to record her third upcoming full-length album.   Mint Green Mercury is a nod to fond early memories of cruising around in the family's 1977 mercury listening to the sounds of the Deep South. This trove of adult alternative original songs is coloured with a distinct contemporary Americana sound including elements of country, roots-rock, folk and R&B, all set to the timbre of Tamara’s arresting voice.   Tamara released two previous solo albums (Self-Titled, 1998, and Feeling Pretty, 2000). After a hiatus from her career as an original singer-songwriter, Tamara has kindled her love of writing compelling, emotive music; motivated by her need to once again share her art with her audience.   Stay tuned for new singles from Mint Green Mercury as she heads into the album release nationwide on Canadian Radio. https://www.tamaramaddalen.com/