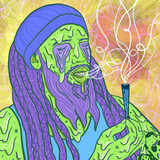 While some emcees in the industry may express themselves lyrically merely to compliment a dope production, Bluntfield’s raps are dealt out with a deft flow of rhymes and social commentary without compromising his message. Perth born and bred emcee Bluntfield has been gaining a loyal following both on the live circuit & online; with videos such as the award-nominated “The Dark Crystal” (which tackles the meth addiction epidemic). His latest release 'Strange Times' sees the further development of his unique sound, along with the sharp social commentary & lyrical flow that is showcased with each release, produced by frequent collaborator, SBX member and Shake Down Records head honcho Rob Shaker and Loftwah the Beatsmiff. A seasoned performer, Bluntfield has toured with Aussie Hip Hop giant Seth Sentry & shared the stage with the likes of Chris Webby, Dizzy Wright, Downsyde, Drapht, The Four Owls, Hopsin, Merkules, Ocean Wisdom, Spit Syndicate & Swollen Members to name just a few. He has performed at Southbound Festival, Nimbin MardiGrass, RottoFest, Perth Fringe World & at more than 20 sold-out shows with 'Comedians vs Rappers' as well as taking out the 30 man elimination 'War of the Words' tournament in 2018. A three-time West Australian Music Industry Song Of The Year finalist, Bluntfield is no stranger to crafting quality hip hop, with 2020 seeing two new albums: the 4/20 themed 'Memoirs of a Blazer' along with the RED KELLY mixtape, 2021 shows no signs of slowing down!