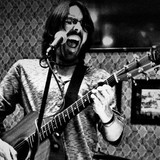 Sussex UK based singer-songwriter and producer Jamie Stanley (aka: Stan / Mailman) has been writing, recording and performing his music for as long as he can remember. Which, on a good day, is about a week. He released a single a month in 2019, all of which appear on the December 2020 Mailman album S3ASON along with three alternate versions and three brand new tracks. The result is an attempt to square the circle of a pre and post Covid world. The début Mailman album 'No News Is Good News' was released in 2014 on SJE Records. The 2018 follow up 'Yang Yin' was mastered by award winning engineer Mandy Parnell (The XX, Bjork, Brian Eno, Aphex Twin, UNKLE) and was longlisted in three categories of the 2019 MPG Awards alongside the likes of Arctic Monkeys, Manic Street Preachers and Tori Amos. It wasn't shortlisted but Mandy went on to win her category for her work that year, including on 'Yang Yin'. Since his open mic beginnings at age 18, Stan has earned a reputation as an artist with a social conscience, not afraid to tackle the big subjects. On 9th Nov 2011 he shared a makeshift stage with Billy Bragg, Chumbawumba, Peggy Seeger, Steve Knightly and Leon Rossiter at Occupy London and performed his song Fear of Foxes to the 600+ crowd on the steps of St. Pauls. The studio version appeared on the début EP 'Long Walk Home'. The 2nd EP 'The Karma Sessions: Volume 1' came out in February 2012 and is available exclusively on Bandcamp, as is the 2015 follow up ﻿'Vol. 2'﻿.