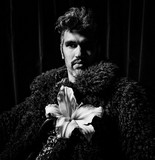 Anyone who has had the opportunity to listen to Bracken knows how special this artist is. He freely combines folk, blues and soul, with the best traditions of songwriting. Live his music sounds exquisite and accompanied by guest musicians both the energetic and melancholic songs of Phillip are even more colourful.’ -Wojciech Zurek, www.e-splot.pl Known for his evocative voice, hypnotic guitar styling’s, and warm stage presence Australian Phillip Bracken relocated to Poland in 2013. It was the combination of these qualities and his spin on indie folk and ambient world music that brought about his introduction to Polish ethno jazz icon Jacek Mielcarek and led to two live recordings, The Opole Session, and Live at Radio Opole, as well as subsequent touring. As well as access to a wider audience in Europe his new home has brought about some interesting opportunities. 2019 saw his single New Black picked up by Polish label KAYAX as part of their project My Name Is New as well as a guest appearance on the award winning album Smack by Polish guitarist/producer Robert Cichy. The latest offering from the Australian is a song called Take My Hand, the second single from Bracken’s forthcoming debut album Wolf Ahead, Tiger Behind with hints of Sigur Ros, Eddie Vedder, and Fink.