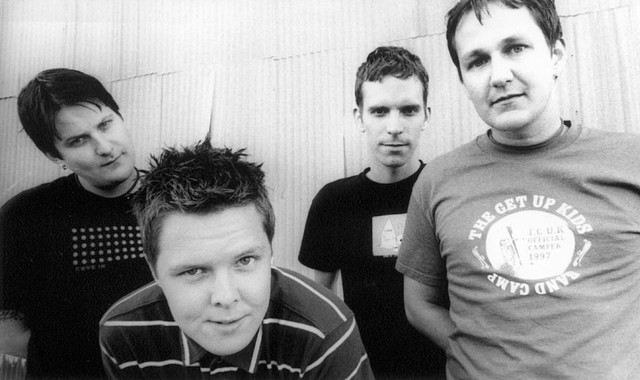 Born of the ashes of the now legendary Chicago emo outfit Braid, Hey Mercedes had a tough reputation, not to mention their work cut out for them from the start. It all began in mid-1999, when Braid decided to call it quits and original guitarist Chris Broach left the group. They closed out their career with a series of well-received and well-documented local shows before Broach went on to work with his other act, the Firebird Band, and the remaining members -- guitarist vocalist Bob Nanna, drummer Damon Atkinson, and bassist Todd Bell -- attempted to return to their normal lives. Given that "normal" are often boring, it was mere months before the three decided to regroup, and Hey Mercedes was born. Drafting former Alligator Gun guitarist and Milwaukee native Mark Dawursk, Hey Mercedes officially came into being in April of 2000, and almost immediately headed into the studio to record a four-song EP for the Danville, Illinois-based Polyvinyl Records. The self-titled disc was a mix of the churning syncopations of Braid and a newfound melodic structure, highlighted by Nanna's fantastically solid vocal presence and a more laid-back but still commanding musical approach from the rest of the band. Eschewing the more aggressive nature of their old music, Hey Mercedes was a more accessible and melodic entity, and it didn't take long for their songs to win the hearts of a new generation of young music fans caught up in the burgeoning emo trend. Old connections led to high-profile touring slots with acts like Jets to Brazil, Saves the Day, and Alkaline Trio, and the band was soon signed to Vagrant Records, a trend-setting and powerhouse label in the genre. Early 2001 saw the group head back into the studio with producer J. Robbins to record their debut full-length, a powerful 11-song effort titled Everynight Fire Works, which after countless delays was finally released by Vagrant in October of 2001. The record is a continuation of the band's commendable post-emo songwriting, and may be the final nail in Braid's coffin, as it appears that Hey Mercedes is now an act well worth mentioning in its own right. This was confirmed by the release of the Weekend EP the following summer, as well as the semi-regular updates found on the band's website. Michael Shumaker replaced Dawursk in 2002, and played on the 2003 full-length Loses Control, remaining with the group for their occasional reunion shows. ~ Peter J. D'Angelo, Rovi