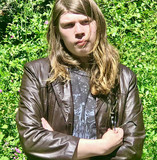 BlizzardFire is the stage name of rocker Garrett Dunne. BlizzardFire has seen the release of 4 singles, an EP and an album to date. The music released by Dunne has been inspired by the likes of Nirvana, EricClapton, Pink Floyd, and more. After taking several months to break from any band related activities following their last band’s breakup, Dunne and brother David Dunne-Bjornsen both decided to release their first single in September of 2019. The single was the first stepping stone to doing what they said they would do, rock. Love,Lust,Greed was another big mile marker for the duo. The EP had shown the world what BlizzardFire is about. After the mostly joyful direction of Love, Lust, Greed; they decided to take the band in a whole new direction for the follow up. Influenced heavily by the sound of the Seattle Grunge Movement, Drop C# tuning was greatly utilized while making the record to give the heavy sound synonymous with A DesolateHope. Following the reflective album, the brother’s split. David went on his own path, while Garrett continues to carry the music of BlizzardFire on his back.