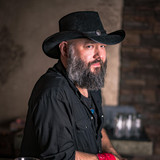 Texas born and southern raised, Joe Buchanan makes Country music that is steeped in Torah. A convert to Judaism, he grew up struggling with religion and his place in the world. Then, one day outside of the Holocaust Museum in Washington D.C. and 13 years into their marriage, his wife told him that she was Jewish. An exploration of faith led the way home for the whole family and kicked off a whirlwind of songwriting and study, ultimately leading to Joe's debut album - Unbroken. Since then, he's toured the U.S., leading an original Shabbat service, concerts, and workshops. Joe also serves as an artist in residence for communities, guiding an entire weekend of prayer and song. He's been featured at numerous conferences and festivals, as well as synagogues and venues across this great land. The goal of his music is to help drive connection to what connects us all and to hold the door for other seekers.

His newest album is called Back From Babylon.