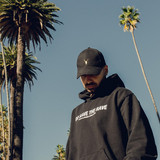 Yogesh "Yogi" Tulsiani is a collaborative producer and songwriter whose tracks are primarily a highly energized form of commercial dubstep. After working on Professor Green's Alive Till I'm Dead, the North London native scored his first big hit in 2011 with Wretch 32's "Traktor," which shot to number five on the U.K. pop chart. This was the year Tulsiani also appeared on the Ministry of Sound label with "Follow U," his first single as a headliner. In 2014, signed to Skrillex's OWSLA label, he issued the Burial EP with Pusha T on the Billboard-charting title track and Casey Veggies on "Christian Bale," and collaborated with Santigold on her contribution to the World Cup tie-in compilation Beats of the Beautiful Game. Across the next few years, Tulsiani's work included his own "SIRI" (featuring Pusha T again), Lido's "Citibike," AlunaGeorge's "Not Above Love," and Tinie Tempah's "They Don't Know." His singles "Blow You Up" (with AlunaGeorge and Less Is Moore), "Money on My Mind" (with Juicy J and Alexander Lewis), and "Cakin" (with DRAM and Lady Leshurr) arrived during 2016 and 2017. "Blow You Up" became his second single to register on Billboard's Hot Dance/Electronic Songs chart. ~ Andy Kellman, Rovi