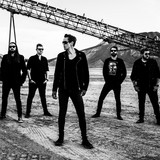 From reservoirs of darkness and neon lit nightmares rises Finnish five-piece LAMORI. They define their sound as uniting gothic metal with dark wave, modern rock and everything in between. With Lyrics inspired by cult horror movie maestros and old romanticism, the band furthermore finalize their macabre elegance. Musical inspiration is taken from bands such as The Sisters of Mercy, Depeche Mode, Marilyn Manson, Deathstas, Rammstein, The Doors, The 69 Eyes and early HIM. Founded in 2009 on the Aland Islands, an autonomous region of Finland. The band self-released their first album Deadly Desires in 2013 under the name L'Amori (later changed to LAMORI). After penning a deal with Wormholedeath a year later, the band started working on their first major album To Die Once Again, released in 2016 under the new name LAMORI. The third album NEO NOIR was released on 31st of January 2020. Four singles with accompanying music videos were released prior to the album. The single An Angel by Your Side received most praise, now having reached over 400.000 views on YouTube. As of April 2021 the band has started working on their fourth studio album, due for recording this year.