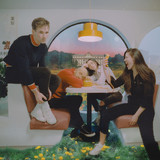 Said the Whale have earned their place in the Canadian music pantheon. They’ve won a JUNO Award, topped the alternative radio chart, and amassed a devoted base of fans who affectionately describe themselves as “SaidHeads” — all the while maintaining their resolute independent spirit. Now, more than a decade into their career, the Vancouver group are opening their most ambitious chapter yet. 2020 lockdowns the band away from the touring cycle that had defined most of their 14-year career. Singer-songwriters Tyler Bancroft and Ben Worcester, plus keyboardist Jaycelyn Brown and bassist Lincoln Hotchen, threw themselves fully into working on new material with producer Steve Bays (Hot Hot Heat), resulting in the most towering, maximalist music of their careers. Stately piano, roaring guitar distortion, giant-sized synths and orchestral flourishes — every moment blooms with bright, vivid sounds and subtle details. But in spite of the grandiose arrangements and go-for-broke production quality, the new songs are, at their core, classic Said The Whale. Lead single “Honey Lungs” (out March 19) is a bright and bubbly anthem, its crunchy rock swagger shot through with frenzied drum fills and sugar-spiked pop singalongs. Six albums into their career (with a seventh on the way), Said The Whale are now fully independent and refusing to bask in success. They’re swinging for the fences and holding nothing back in their relentless pursuit of pop-rock perfection.