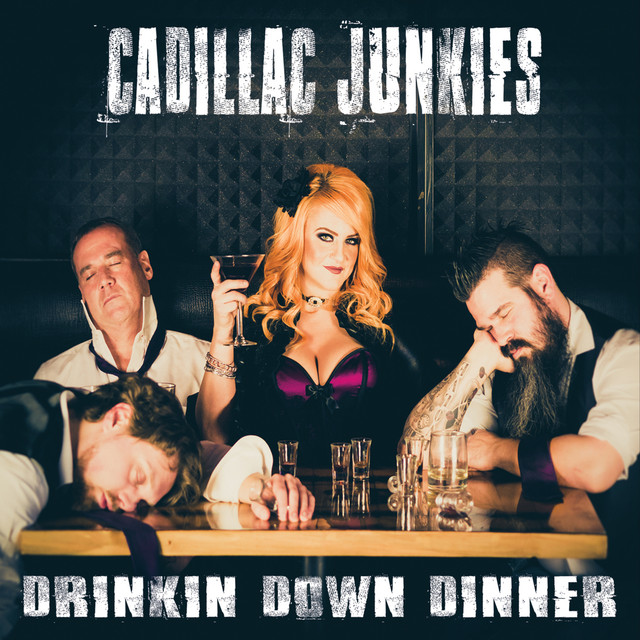 Cadillac Junkies is back in Canada! The band was invited to play five shows at the Live at Heart Music Festival in Orebro, Sweden on August 31 through September 2, 2017. This festival featured over 200 bands from all over the world and Cadillac Junkies was honoured to be counted among them. A video blog of their trip and adventures in Sweden and Denmark will be available for the public through their website www.cadillacjunkies.com on September 7, 2017. When in Sweden, why not shoot a music video? The music video for Cadillac Junkies new single “Don’t Walk Away” off their debut album “Drinking Down Dinner”, was filmed on location in Sweden. The video and single for “Don’t Walk Away” will be released October 2017. Shalisa Liesch and Dennis Boisvert met when they were both members of another band in 2010. The two instantly bonded over a love of liquor, laughs and music. When they decided to venture out on their own, coming up with a band name was harder than expected. On a road trip, Dennis was driving while Shalisa was upside down in the passenger seat as they went over all the possible names for their new band. Dennis commented on cool looking cadillac that passed them on the road and Shalisa immediately recalled a fan from a previous show who belted out “Cadillac” at weird times throughout their performance of Cadillac Ranch by the Nitty Gritty Dirt Band. “That guy was like a Cadillac junkie,” she said. Both laughed and shared a look. The band name Cadillac Junkies was decided on then and there. Based in Edmonton, Alberta, Canada, Cadillac Junkies presents an eclectic mix vintage country and modern pop sensibilities with a little bit of grit. Shalisa’s powerful voice on lead vocals and Dennis driving the groove of their performances from behind the kit, capture your attention and take you along for the ride.