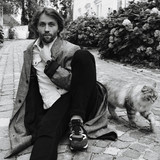 LA-based Norwegian artist, composer. Signed to Virgin Records at 16, his debut Faces Down was one of Rolling Stone Magazine's Best Albums of 2002, while also winning a Norwegian Grammy. Follow-up Two Way Monologue was a 2004 Album Of The Year in Uncut Magazine, and Lerche toured extensively across the world both solo, with his band, and with the likes of Air, Stereolab, Elvis Costello, Milton Nascimento. In 2006 he scored a surprising Billboard Top 5 Jazz album, Duper Sessions, recorded the rambunctious Phantom Punch, as well as scoring the Steve Carell/Juliette Binoche hit movie Dan In Real Life (Original Motion Picture Soundtrack). Said the LA Times about 2009's lush Heartbeat Radio: "No matter what genre he's working in (...) his refrains always pay off". Lerche co-wrote Dear Laughing Doubters for the 2010 comedy Dinner For Schmucks. In 2011 he made his second appearance on David Letterman's Late Show, performing from the stripped down, self-released Sondre Lerche, while in 2012 he had the honor of appearing on an official postage stamp in Norway. The 2014 release of his score for Sundance indie-hit movie The Sleepwalker was followed by Please, which Popmatters called "a pop masterpiece”, naming it one of the best albums of the year. 2017’s groovy, flamboyant Pleasure was a "thrilling sonic reboot", according to Allmusic, followed by an extensive 100-date world tour, and Solo Pleasure. 2020 saw the release of Patience, a bold, career-defining collection of songs.