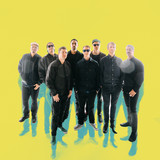 While firmly based in the island grooves that inspired the birth of the band over two decades ago, The Black Seeds' sound casts a wide net, layering funk, soul, Afrobeat, and other eclectic elements over their dub/reggae foundations. It's "contemporary groove music with influences from soul and funk and reggae rhythms" explains guitarist/vocalist Barnaby Weir. Described by Clash Magazine as "one of the best live reggae acts on the planet," The Black Seeds legendary eight-piece live show infuses raw energy and good vibes wherever they go, fueling multi-platinum sales and a growing worldwide following. With countless sold out tours behind them and performances at many of the world’s leading festivals, The Black Seeds live show delivers a soul party on time, every time.