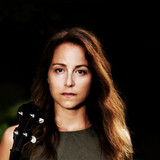 With a vocal described as having “a purity to it that we rarely hear” (Ear to the Ground Music), Biologist-turned-Singer/Songwriter Maggie Pope pairs an ethereal voice with expressive songwriting. On January 25th, 2019, she released a 5-song collection of organic, home-recorded folk tunes on the Winding Way Records label… it was a humble endeavor that started on a quiet night in June of the previous year, when she recorded the songs on a small, handheld recorder. The tracks eventually made their way into the hands of Shani Gandhi, Grammy-winning producer and engineer, who mixed the EP and polished up the songs before release. This debut solo offering, June Tapes, resonated authentically with listeners, many of whom noted a nostalgic quality to her vocals that seemed to hold a sensitivity and texture that harkened back to voices the likes of Eva Cassidy or Joan Baez.  The summer of 2021 will bring a flood of fresh releases from Maggie Pope. Some lushly produced, exploring more complex arrangements and collaborations with other artists, and some with a nod back to the organic balladry of June Tapes; the simple, sparse acoustic sounds that mark the musical place from which she came. Look for the first single, The Bird Painter, produced by Steve Varney, frontman of Kid Reverie, and banjoist/guitarist for Gregory Alan Isakov, to hit streaming services June 25th. ﻿Maggie writes and performs both a solo artist and as a member of the Folk/Americana band, Under the Oak.