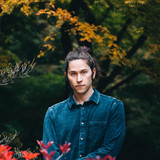 Over the course of the 2010s, producer and composer Jackson Stell's work as Big Wild has evolved from abstract, chilled-out beats to colorful, reflective pop. The multi-talented musician sings and switches between multiple instruments during live performances, and has become a successful touring act. Following numerous singles and EPs, including collaborations with singers like Tove Styrke and Yuna, Big Wild's debut full-length, Superdream, appeared in 2019. A native of Lancaster, Massachusetts, Stell first began making hip-hop-influenced beats as a teenager. He also spent time attending Northeastern University in Boston, where he worked under the name JBeatz. However, it wasn't until he relocated to California in his twenties that he began using the name Big Wild. Inspired by his love of the surrounding landscape in the Bay Area and the natural beauty of Big Sur, Stell began producing distinctively atmospheric, groove-oriented tracks. Live, Stell mixed his computer-based recordings with piano, drums, and other instrumentation. In 2015, Big Wild caught the attention of Seattle electronic duo Odesza, who invited him on tour. That same year, Big Wild released an official remix of the Odesza track "Say My Name." One year later, his track "Aftergold" (featuring Tove Styrke) earned praise as well, and he toured with like-minded producers including GRiZ, Tycho, Pretty Lights, and Bassnectar. The Invincible EP, released in early 2017 on Odesza's Foreign Family Collective label, included the single "I Just Wanna" plus features by Yuna and iDA HAWK. Stell set out on his own tour that spring, hitting 27 dates around America. "Show Me," a collaboration with experimental band Hundred Waters, capped an impressive year for him. He signed to Counter Records, and several 2018 singles, including "Joypunks" and "Heaven," led up to the release of Big Wild's full-length debut, Superdream, in 2019. Aside from guest appearances by iDA HAWK and Rationale, Stell wrote and sang all of the material himself, resulting in his most personal, fully realized work to date. ~ Matt Collar, Rovi