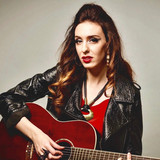 Sabina Chantouria is one of the new rising stars in Swedish pop music. Her sound is as eclectic as her Georgian-Swedish roots. With her velvet voice and rhythmic guitar, she’ll take you on a journey that evokes emotion and leaves you breathless. In 2011, Sabina was selected for the World Championship of Performing Arts and was a 2017 Georgian National finalist for Eurovision. Her music has been put in rotation on international radio and she has performed at numerous festivals all over the US, Europe and Georgia. Sabina has also performed live on television and radio, working with music producers worldwide. Sabina released her new single and video "Fire and Flame" October 16th 2019.