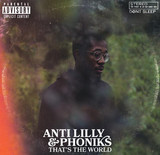 Anti-Lilly is a Hip-Hop artist out of Houston, Texas known for his honesty and thought provoking rhymes. Just turning 26, he's released 5 projects since 2013 with his most recent being "Its Nice Outside" with frequent collaborator and producer Phoniks. They first came together in 2014 with the project "Stories From The Brass Section" which have both been well received to underground acclaim. Anti has been featured on publications such as 2DopeBoyz, DjBooth, XXL, RESPECT, The Source, and many more. With over 130,000 streams on Spotify a month, over 500,000 views on Youtube and also on Soundcloud. Anti hopes to continue to build his following and travel the world with his music.