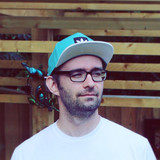 MATTE! is the alias of James Dinsdale, an electronic music producer from Southsea, UK. Combining minimal electronic and lo-fi house vibes, his use of layered rhythmic elements and deep bass outline his signature style, which is just as appropriate for a late night club room as it is as a relaxing soundtrack to everyday life. Having played guitar and bass from a young age, he started his music career as bassist in a series of indie rock bands in his late teens. After a long hiatus, he returned to music again in his late twenties, making electronic music in his home studio. His debut EP 'Black' was quietly released May 24th, 2019. Singles 'Blood' and 'Dust' followed in July and August of the same year, swiftly followed by 2nd EP 'Rouge' on September 6th, 2019.In late 2019, MATTE! collaborated with artists 59Perlen, Atlas Castle and Mjoi to work on a series of remixes of tracks from Rouge. The resulting EP 'Rouge Remixed' was released on November 29th, 2019. Single 'Aurora' was released on 29th May 2020, followed by another single 'Lagoon' on 26th June 2020.