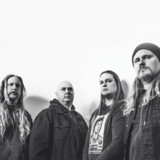 This Finnish heavy and melodic metal band was formed 20 years ago in Hankasalmi, Finland. They are still very active and have released several albums over the years.