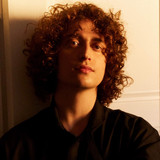 Celebrated Swedish art music composer Jacob Mühlrad, born 1991, has rapidly emerged as one of the most recognized composers in the Nordic countries and have had his work performed at the biggest venues in Sweden, as well as Carnegie Hall in New York and National Portrait Gallery in London. Mühlrad has also earned recognition through his pop music collaborations, together with artists like the Swedish House Mafia and feminist rapper Silvana Imam. Mühlrad has written extensively for chamber ensembles and orchestra, his choral music is a very distinctive and important element of his work, and through it he has been able to achieve a unique expression of the mystical aspect of Jewish tradition. Anim Zemirot (2013) represented a breakthrough for Jacob, and is now a standard in the repertoire of many outstanding European choirs. Kaddish (2017) is a work with a deeply personal connection to the Holocaust, of which Mühlrad’s grandfather was a survivor. His piece Angelus Novus is being toured around the world by Martin Fröst. The upcoming release Tröstrapporter (comforting reports) is a composition for piano specially commissioned for a play that is one of the most anticipated premieres this year at The Royal Dramatic Theatre in Stockholm, Sweden. The play is written and directed by Alex Schulman, one of the biggest names in Swedish popular culture. The music is co-written and co-produced with jazz pianist Joel Lyssarides, who is also playing the main body of the tracks.