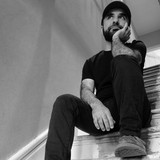 Paper Fishes are an indie rock band, formed by Andre Levy as an outlet for his simmering discontent with himself, his family, 21st century politics and consumer-capitalist society. Their songs, described by Levy as 'finger-pointing songs and therapy songs', are simultaneously literate and visceral, political and poetic; setting Levy's unflinching, introspective lyrics against a backdrop of country, folk, lo-fi and Americana. Paper Fishes took their name from a collection of short stories by the American writer and artist Kristin Joyce Stevenson. Other short-listed band names were The Dead Beats Society, Boulevardiers, Kill Your Darlings, and Marginalia. Other writers they like include Umberto Eco, Kazuo Ishiguro, and Kurt Vonnegut. They're that kind of band. But they're more and less than that too. Like the film Mallrats if you watch it backwards. Paper Fishes are signed to the UK-based not-for-profit label Irregular Patterns. And no one bothered with social media again.