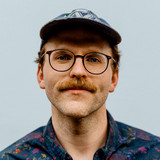 Jordan Prince is an American Singer-Songwriter. He was born in Mississippi, educated in New Orleans, and is currently based in Munich, Germany. Jordan's upcoming album, Simple Swimmer (2021), focuses on diverse textures and the element of surprise to help emphasize the darker sides of his personality. The first single from this album, "The Crooked Rail," was released in May 2020 to positive critical reception. Jordan works on his original music, as well as original score for Television and Film. Jordan can be heard on the Swedish TV show "Älska Mig," the Linda Hamilton feature "Easy Does It," BR/Netflix's "Hindafing," and the new ZDF Neo/NeueSuper production "Breaking Even." Jordan often works with collaborator David Reichelt.