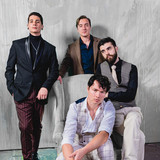 Fresh off their first US tour the alternative, LA based 4 piece known as Animal Sun have a lot to be thankful for. Their debut album ‘echoes of a dream’ reached 4 million plays in just a few months after its release, with their lead single ‘girl in blue’ even earning a single deal with a division Universal Music Group. In tandem with their streaming success, Animal Sun also received support from major magazines such as Alt Press and American Songwriter, as well as renowned radio stations such as idobi and KROQ Locals Only. Their hit 'girl in blue' even snagged the #5 spot on KROQ, with their follow up single ‘touch’ placing at #2 for multiple weeks in a row.  In terms of the band’s history, Animal Sun’s official line up was formed in 2019. Lead by brothers Steven Blake, (vocalist/songwriter), and drummer William Alton. the two cut their teeth playing small clubs throughout their native home in central Virginia before moving to LA. The name was in dedication to their late friend James Sun, who’s life was tragically cut short in 2011. By the time Animal Sun had made the move they had already begun growing a solid following while opening for noteworthy acts such as The Frights. It was here where they would meet keyboardist Tyler DeCastro, and bass player Adam Gardner. With their debut album and tour now in the review mirror, Animal Sun is already gearing up to release their sophomore effort with two more tours planned in 2022.