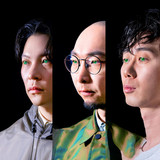 IDIOTAPE is an electronic trio from South Korea formed in 2008. Dguru and Zeze, both renowned DJs and producers in Seoul's electronic music scene, came together with the drummer DR, formerly of pop-punk group Sugar Donut, to release a critically acclaimed debut EP titled 0805 in 2010. Following its success, the band released three studio albums and four singles to this date. Influenced by Korean classic rock from the 1960s and 1970s, IDIOTAPE’s unique sound is a genre-bending musical concoction of synth-driven rhythms and thumping beats of acoustic drums. Much celebrated for their energetic live performance, the band has garnered attention from critics and audiences around the world allowing them to headline a number of high-profile events in Korea such as Pentaport Festival, Ultra Music Korea, and Global Gathering as well as several iconic international festivals including Glastonbury Festival, Reeperbahn Festival, Sziget Festival, and Summer Sonic. Over the stretch of a decade, all of IDIOTAPE's releases have been nominated for the prestigious Korean Music Awards from which the band has won Best Dance & Electronic Album in 2012 and 2018, positioning them as one of the leading electronic musicians of the recent years.