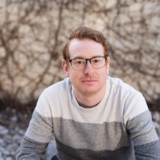 For Kitchener, Ontario-based folk musician Luke Michielsen, songwriting is a necessity. Since he was a teenager, it has been a way that he processes emotions, turning his personal experiences into heartfelt songs that have connected with audiences around the world. Following his 2017 standalone single “Berlin, ON” – a reflection on the history of Kitchener – Luke is preparing to release his new record, Landlocked. Produced by Joshua Cwintal and mixed by Andy Magoffin at House of Miracles Studio in Cambridge, Ontario the album’s nine songs are intimate alternative-folk affairs that largely focus on the mental health repercussions of overworking.