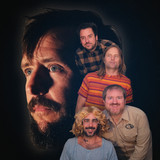 There might be no other band that was able to channel the generational anxiety in those early millennial years and turn it into such powerful and inclusive art quite like Band of Horses. Band of Horses fashioned gorgeously ragged epics, Ben Bridwell’s high-flying vocals and eccentric enunciation floating like a specter that felt like prelude to a dream. Full of profundity, truth and sometimes just homespun advice on how to live, Band of Horses songs have become anthems and touchstones for fans. Emotionally intense, both on a personal and elemental level, the songs for Band of Horses’ sixth album, Things Are Great, find Bridwell more autobiographical than he’s ever been on record, detailing the nebulous frustrations and quiet indignities of relationship changes and what a person will do to make things right. And what you do when you can’t. Band of Horses is composed of Bridwell, longtime members Ryan Monroe and Creighton Barrett and new members Matt Gentling on bass, and guitarist Ian MacDougall. This fresh chapter finds the band recapturing the raw emotion and unpolished punk-rock spirit of its early days. The songs on Things Are Great document the connections in Bridwell’s life that have shifted, or remained. An epic album, Things Are Great is not an exercise in nostalgia or regret. It’s closer to the classic pattern of the hero’s journey, one where Bridwell doesn’t locate those elusive answers but does find himself in the end, providing hope that all of us can do the same.