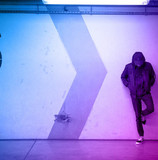 The Majorz is an up and coming music producer and audio engineer based in Seattle, Washington. He got his first look on native artist Lil Mosey’s first mixtape, NorthsBest, under the producer name Mahari. He then went to produce for local acts such as Nowornever. After undergoing a rebrand, The Majorz has set himself to be the next biggest producer and engineer to come out of the city. Inspired by the legendary Noah “40” Shebib, The Majorz is hard at work perfecting his craft in every element of music.   themajorz.net